While Im in blogging mode I thought I might as well put up a few more merino piccies...with a few behind the scenes shots too. 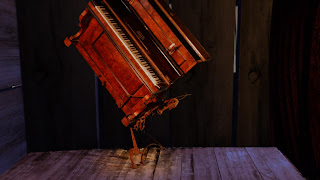 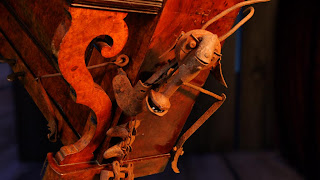 Here are a couple of shots from the piano scene. Yes it is a real piano and yes it was bloody heavy. It has been partially gutted (courtesy of Erik Pootjes) but it still weighs a lot and made me nervous whenever I was lying underneath it. Here's a couple of raw shots with all the green screen stuff still in place. 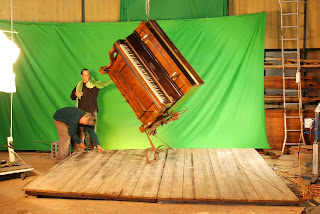 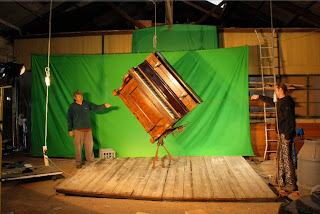 That's Erik on the left and Doug Hockly in the extremely fetching leopard skin pants on the right (this scene was film in Doug & Tash's shed).

You can see a rope fixed to the top of it....this runs up over a pulley and then down to a 44 gallon drum chock full of weights to try act as a counter balance. So it was possible for one person to move it up and down without having to actually lift the weight of the piano.


As you can see...terrible, terrible green screens....but luckily for me I'm working with very monotone models....sometimes it has been easier to key out the brown models rather than the background and then invert the matte.


An animator friend of mine (Al MacInnes) on seeing this commented that he thought the whole point of animation was so people didn't actually have to lift real pianos anymore...


I'm going to attempt upload some actual animated footage soon and will post again when I manage to do this.
Posted by dave at 4:59 PM