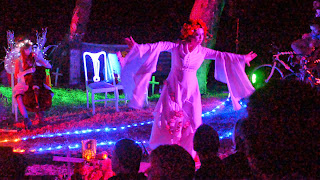 The dust has settled on the 2013 Frinj Festival and, after a week of being gut-wrenchingly,  head-poundingly, bed-riddenly, ill I'm starting to feel vaguely recovered (both from the festival and subsequent sickness). Almost human.

Lots of good bike powered things this year (if I do say so myself). No single big show as in years gone by, but rather a whole suite of smaller things. This was part of a deliberate attempt on my behalf to avoid another high stress all or nothing moment like the final showing Highly-Strung show of 2011...

Basically just spreading myself so thin I couldn't possibly fail at everything.

Only time will tell.

Right now my gut response is that it was more of a juggling weasels experience than a pushing a rhinocerous into box type experience but not really less stressful in any meaningful way.

Still a few good things came out of it. A few things I'm really quite pleased with.

Such as the dueling unicycle puppets, concieved by me and realised by Anthony Schellens. Its a race and these larger than life-sized puppets get propelled around their course by two punters pounding away on their respective stair-masters. 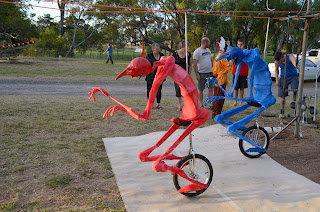 And then there were the games, a series bike-powered virtual reality machines, my first experiment with the Oculus Rift and still very much a work in progress. With the help of an arduino (and another big learning curve), I managed to take a bike covered in sensors and hook it up to the rift to give festival goers their first taste of Virtual reality (in exchange for a pint of sweat). It really feels like there's a lot of potential for this and its definitely something I plan to flesh out in the near future. 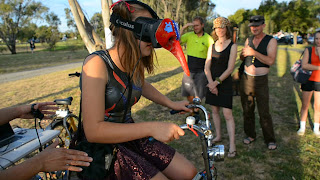 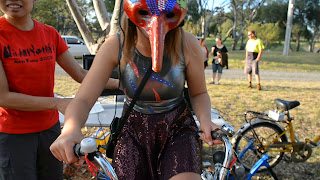 And last but by no means least... "Somethings afoot in the dead of the night" a performance event and LED lighting spectacular with 8 Foot Felix where the entire energy needs of the show were created by just four bikes with the audience being invited to step up, take a turn on the pedals and help to make the show happen. It was really create to have the band throw themselves into this so completely and embracing the spirit of experimentation and risk taking that has always been the strength of the Frinj. I'm really happy with what we managed to achieve with a whole bagful of unknowns and not a whole lot of time to bring it together. 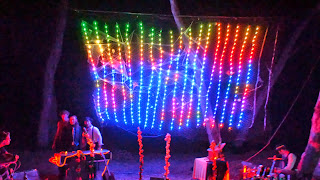 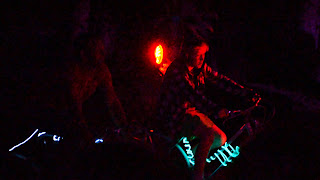 I'll come back and revisit each of these three bits with loads more photos, videos and a bit of behind the scenes type stuff but just wanted to get something out there for now,  just to prove to myself that it all happened.

Thanks so much to the Frinj folk, the committee and the volunteers for all pulling together and making this the most action packed festival yet. And thanks especially to Callum and Anthony for stepping in to pick up all the pieces I'd scattered so widely and helping to turn them into something better than I could ever have done on my own.  Thanks also to the funding bodies VicHealth and Festivals Australia for having the vision to back us in the development of these ideas.
Posted by dave at 10:23 PM 1 comment: