Well, as far as I can tell, we seem to have survived the forecast end of the world. I can tell you how much this pleases me, as I would have felt like a complete idiot having spent the world’s last week, writing grant applications (speaking of grant applications, stay tuned for some VERY exciting news in the next few days).

The frogs however would do well to listen to the words of nut bag kooks like Harold Camping. 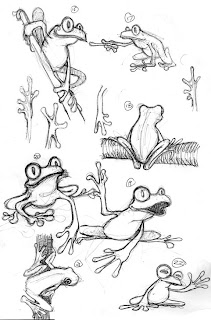 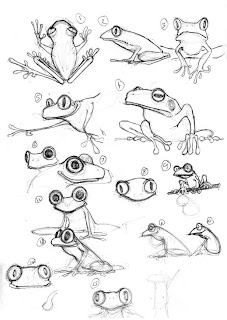 I did these sketches for a project a while ago (for a project I’ll hopefully be talking a bit more down the track) and today seemed as good as any to put them up. It may not have as much to do with god as he thinks and his dates may not be spot on, but (with about 170 species lost in the last decade and 1,900 species on the way) for frogs on the whole, the end is nigh. Unless something fairly miraculous happens.

It bothers me greatly me when people talk about biblical proof for the end of the world, or some god or other intends this or that. If the world ends any time soon it will almost certainly be at the hands of humans, and it would be good if we (as a species) would face up to that, be perhaps just a little bit accountable, and stop point fingers in stupid places. Now I realise that sticking a bunch of half-arsed scribbles up on the web isn’t going to do a whole lot for the frogs either, and frankly I’m not sure what is. Frogs are just one good example of the sort of actual real problem that I wish people were spending more of their time and energy looking into than stuff like judgment day.

And on a final note… Jill, who’s birthday it is today, was also very pleased to see that the world didn’t end on Saturday. Happy Birthday Jill.
Posted by dave at 10:49 PM No comments:

Email ThisBlogThis!Share to TwitterShare to FacebookShare to Pinterest
Labels: frogs


...none of the paint on glass bits though which were my favourite.

Here is a clip of the paint on glass animation by the students from Balomoral on its own but I couldn't find any of it when it was projected onto the building.