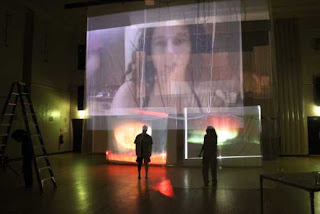 Work on Feed with Anna Loewendahl and Greg Pritchard has continued, slowly but surely. We managed to book the Horsham town hall for a week of workshops. It was great to have such a whopping big space to spread ourselves around in. Not so great was the whopping big windows letting in all the ambient light and making it impossible to do much projection work during the day like Id been hoping. Still... after a week of late nights we managed to get a fair bit worked out. We've done a fair bit of experimenting with using the kinect to track performers on stage and using that to drive the projections. Its such a step forward from just triggering cue points and having to make sure everyone was in the right place at the right time. Hopefully now the actors can just act and have everything else all fall into place around them. 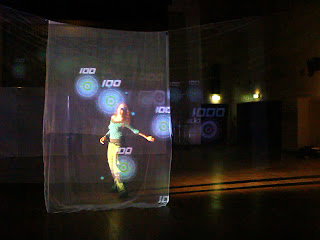 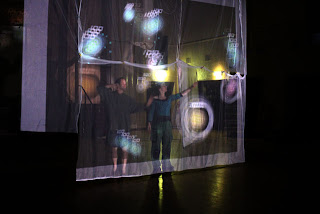 The Up-Car scenes...kind of an updating of the old classic film trick of having the actors jiggling about in a stationary car while the pre-recorded countryside whizzing by is projected onto a screen just out the back window. Only this time were projecting the car as well, and it all gets generated on the fly. The car can be controlled in real time, either manually or buy tracking the performers position and then the city streams by in the background depending on the postion and orientation of the car. 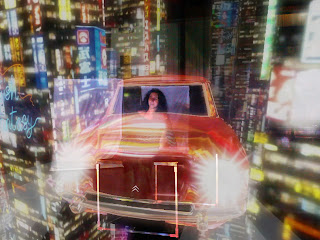 The up-car, and a lot of the animations now were doing with Unity3D. Ive only been using it for the last six months or so, but it seems really flexible in the sort of input it can take (keyboard, microphone, kinect, OSC, etc) and I'm really impressed with what it can churn out in real time. It feels like its going to be a be part of my projection arsenal from here forth. Ive also been using Unity for  a project with Chamber Made Opera down in Melbourne but I'll save that for a separate post. 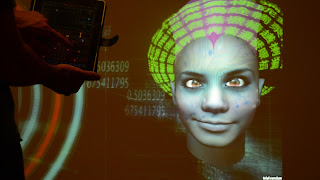 And speaking of inputs and OSC... touchOSC has been another amazing discovery. I think I'm a bit late to the party here but wow! It's literally turn my iPad into the actually useful tool that I hoped it would be when I bought it all those years ago allowing you to easily set up a custom multi-touch panel of knobs and dials and then send those calls off remotely to anywhere within wi-fi range. I really wish I'd known about some of this back when I did Highly Strung (I was pretty happy with my iPod-gaffer-taped-to-pico-projector rig at the time but this just seems so much more flexible and reliable). If I ever remount Highly Strung again I will be revisiting the tech. 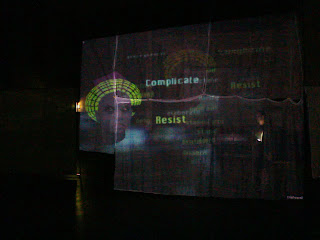 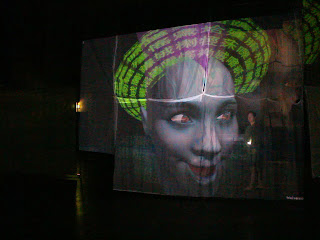 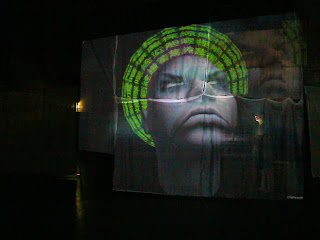 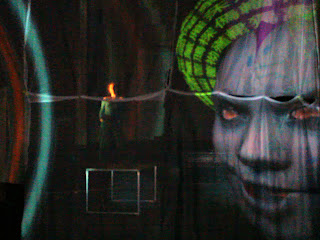 We've got another workshop this weekend in the Natimuk Hall (which can be blacked out) and I shall endeavor to get another post together about that as soon as I can, hopefully with some video snippets this time (and ideally before the end of 2013).