Here's another chunk of animation from the Rhyme Of the Ancient Merino.

Most of this will likely not make it through to the final edit but I thought it made a nice little clip in its own right.

This was all done with actual cake (not the easiest of stuff to animate with). I managed to score these after the Centenary Ball for the Natimuk town hall and what you see here absolutely pales in comparison to the actual spread. I mananged to get shots of a couple of tables groaning with the good stuff before the hoardes descended upon them. 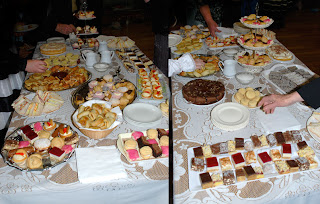 My daughters were delighted when I turned up with the box full of left over cakes ... and then appalled when I announced I was going to feed them all to the goats. Lucky for them ...and me, there was still plenty of cake left for everyone after the shot.
Posted by dave at 4:33 AM